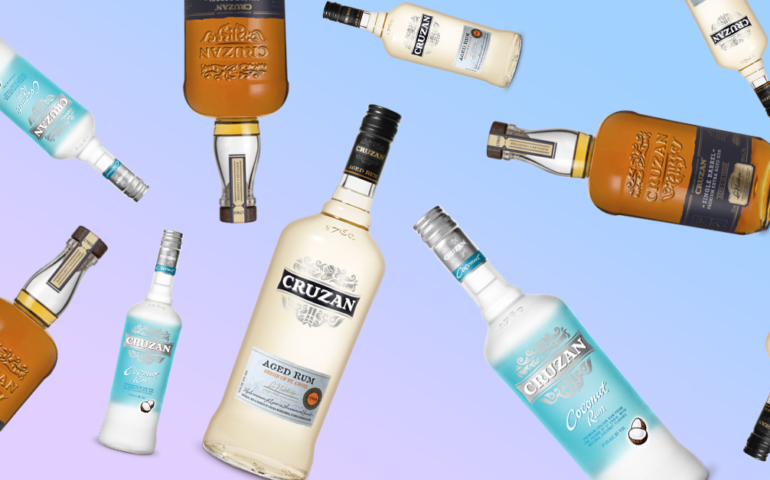 Even though it’s a fairly simple concept — the distillate of sugarcane, barreled and aged, then bottled according to various regional preferences and regulations — many Americans are confused by rum. This is thanks to labeling restrictions that are much looser in the U.S., where sugar cane spirits from Brazilian cachaca to spicy-sweet Captain Morgan are both considered “rum.” (If you’re wondering, at least for us, one means “breezy evenings on a balcony,” and the other means “we’re ordering Domino’s.”)

One rum that would rightfully fight for its authenticity is Cruzan, a 240-year-old rum from a tiny island in the Caribbean. Its history spans the worlds of colonialism, Hurricane Maria, absurdly strong family ties, and some spicy competition with the aforementioned Captain.

Thirsty for more? Here are 11 things you should know about Cruzan Rum.

Unless you’re up on your Caribbean history, current events, or have had occasion to go to St. Croix, you might not know that people from the island are called Crucian, or Cruzan. Thus, Cruzan Rum is so named because it’s rum made in St. Croix.

Being Cruzan is important to locals, and being local is important to Cruzan. Rum can technically be made anywhere that imports sugarcane or molasses (in fact, one of the only definitive rules about rum is that it must be distilled from sugarcane, or sugarcane byproduct). But even if you can get rum that’s made in Reno, there’s a lot to be said for its Caribbean producers, which have endured a complicated history of sugarcane plantations, slavery, colonialism, and early rum distilling that dates back to the early 16th century.

Cruzan produces respectably sippable (and affordable) straightforward dark and light rums. In addition to the basics, the brand offers a rainbow of flavored rums that are lower in alcohol (27.5 percent ABV) and relieve you of the obligation of buying a ton of mixers, if you have soda on hand. The flavors read temptingly like smoothie ingredients: Raspberry, Guava, Strawberry, and Banana. (Do not add yogurt.)

The distillery is as old as roller skating.

Cruzan Rum’s history dates back to 1760. In fact, it’s still produced amid the historic ruins of an old sugarcane plantation called Estate Diamond. Being first established in 1760 makes Cruzan Rum exactly as old as the invention of in-line skating by a guy named John-Joseph Merlin who was obsessed with clocks and helped create this incredible robotronic swan (skip ahead to 1:30). He was from Belgium.

Cruzan has a warehouse that looks both tropically dreamy and deeply haunted.

That’s pretty much it. (Check it out.)

Cruzan proves that alcohol can sometimes keep families together.

The Nelthropp family, which came to St. Croix in the late 18th century and has remained for eight generations, has officially overseen Cruzan Rum since the 1950s. Gary Nelthropp is the current president and master distiller, having taken over from his father in 1991. Karen, Gary’s sister, runs guest services at the distillery; and their brother Donnie is master blender. All of which means a family can actually go to the Caribbean, encounter rum, and still talk to each other.

They have a unique take on ‘Single Barrel.’

Cruzan’s Single Barrel Estate Diamond aged light rum is a sort of single barrel spirit. The reason we’re saying “sort of” is because the rum that ends up in a Cruzan Single Barrel bottle is a blend of aged rums that’s then put into a freshly charred new oak barrel for more aging (about six to nine months). The rum from that barrel is what goes into the bottle. (The result, by the way, is multiple award-winning, and fairly affordable.)

Speaking of barrels, theirs are from Jim Beam.

Cruzan ages its rums anywhere from one to 12 years prior to blending and bottling. And unless they’re making their Single Barrel, the rum ages in previously used Jim Beam barrels. (Both Cruzan and Jim Beam are owned by Beam Suntory.)

Cruzan Rum prides itself on a few things and being “clean” is one of them. Cruzan rum is column-distilled five times before fermenting, resulting in what it likes to call the “world’s ‘cleanest’ rum.” Column distillation, remember, is what they do for vodka — repeat stripping away of impurities like fusel oils, theoretically leaving a cleaner distillate that either ages up to four years and goes into a bottle of their flagship Aged Light Rum or gets some complexity from aging.

When you think of the Caribbean climate, you might think of falling asleep in that “ironic mesh tank top.” The second thing you’ll remember is the heat and humidity, higher here than, say, Scotland, which is why aged rum suffers a much higher loss of product to evaporation (the so-called “angel’s share”). It clocks in at about 6 to 12 percent in the Caribbean compared to Scotch’s measly but still-tragic 2 percent. Cruzan aged rum tops out at 12 years of aging, largely because aging rum much longer becomes a dangerous dance with evaporation and profit margins.

Cruzan makes 137-proof rum for a reason. (Not drunkenness.)

Cruzan’s “Hurricane Proof” 137 proof rum may sound like it has the potential to be Bad Decision Juice, but it’s actually created for a good cause. The distillery shut down for three weeks during Hurricane Maria, and now donates $1 to Hurricane Maria relief projects from every bottle of this rum sold. Also, 137 isn’t an arbitrary, punishingly high proof; the rum is named for the 137-mile-per-hour winds that define a Category 5 hurricane.

The article 11 Things You Should Know About Cruzan Rum appeared first on VinePair.