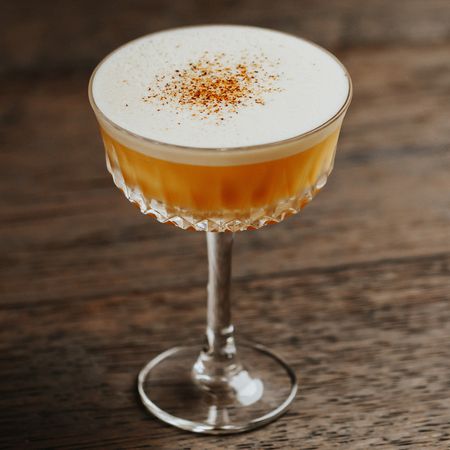 Even if you’ve never had a White Russian before, you’re probably familiar with the drink, possibly from the 1998 film “The Big Lebowski,” in which Jeff Bridges’ character, The Dude, would drink one at every opportunity.

The White Russian is a combination of vodka, Kahlúa (or another coffee liqueur), and cream. It derived from the Black Russian, a cocktail made with just vodka and Kahlúa that was created in the 1940s by bartender Gustave Tops at the Hotel Metropole in Brussels. The White Russian wasn’t born until the 1960s, when someone decided to add a touch of cream to the two-ingredient forebear, creating the rich coffee-laced milk punch. Neither drink is Russian in origin; the name comes from the use of vodka as the base spirit—one often associated with Russia.

These are seven White Russian variations, some closely following the vodka, coffee liqueur, and cream template, and a few others that deviate slightly with additional vanilla or chocolate flavors. We don’t recommend drinking all of these coffee-flavored milk punches all in one go—their richness assures you’d end up with a wonky stomach—but each makes a fantastic nightcap or liquid dessert.

This bare-bones drink was included in Adam McDowell’s book, “Drinks: A User’s Guide,” which offers suggestions for drinking in less-than-ideal circumstances. This “ad-hoctail” calls on pint-size cartons of chocolate milk, the kind you may remember from elementary school. Just add a shot of vodka to the milk carton, plus a straw if available, for a secret on-the-go cocktail. While you won’t be flexing your mixology skills, there’s something to be said for efficiency.

Originally hailing from New Orleans, this milk punch rendition is commonly consumed as a brunch cocktail after a long night of drinking and is particularly popular around the holiday season. The cocktail mixes bourbon, milk, simple syrup, and vanilla extract to produce a rich, warming drink with more depth than a White Russian and is enjoyed by whiskey drinkers and cocktail novices alike.

This milk punch was created by bartender Abigail Gullo while she was working at Sobou in New Orleans and is a mix of spiced rum, milk, simple syrup, and vanilla extract (one of the defining characteristics of a milk punch), which then gets dusted with grated nutmeg and cinnamon. Creamy drinks have a long history in New Orleans, so it’s no surprise that this contemporary milk punch found its way onto a menu.

Originally found on the brunch menu at New Orleans’ Cavan, this drink is the restaurant’s coffee-flavored take on the classic Bourbon Milk Punch. The cocktail is a combination of bourbon, an Italian coffee liqueur (Varnelli Caffè Moka), heavy cream, and a small splash of chicory liqueur, chicory is an ingredient commonly found in New Orleans coffee blends, stemming from the area’s Haitian-Creole influence. There isn’t any actual coffee added to the cocktail, but if you added some chilled espresso to the mix, no one would bat an eye.

If you’re familiar with the Brandy Alexander—another category of cacao-flavored creamy cocktails—and you’re a tequila lover, then this cocktail is for you. It’s a straightforward mix of tequila, creme de cacao and half-and-half, which you might opt to garnish with fresh nutmeg or orange zest. Chocolate and the grassiness of tequila’s cooked agave notes pair phenomenally well together, making this lush cocktail one of the most enticing on this list.

The Brandy Milk Punch is another classic cocktail created and popularized in New Orleans. According to David Wondrich, a cocktail historian and the author of the book “Punch,” the earliest known milk punch recipe dates back to 1711. Although the Brandy Milk Punch didn’t come into vogue until the early 1900s, it’s likely that it has been around for hundreds of years, as well. These days, you’ll find this simple mix of brandy, milk, sugar, and vanilla extract on most brunch menus in New Orleans, most notably at the historic Brennan’s. While brandy isn’t for everyone, its notes of baking spices and dried fruits such as raisin and prune make this punch a real standout.

The Mudslide, essentially a White Russian plus Irish cream liqueur, was born in the 1970s at Wreck Bar at Rum Point Club on Grand Cayman. Needless to say, the drink quickly found its way to American shores and onto the menus of many chain restaurants across the country. That said, if you do have the pleasure of visiting the Cayman Islands, it’s well worth seeking out the cocktail’s bar of origin just to say you’ve had it where it all started.