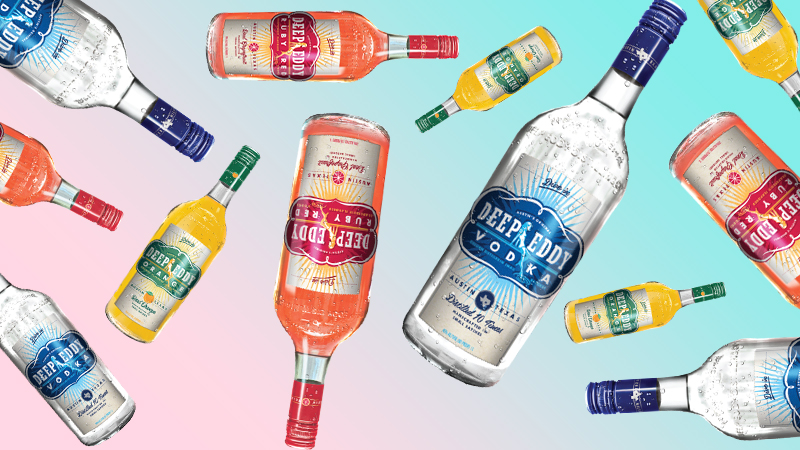 Soon after its debut in 2010, Deep Eddy Vodka became one of the fastest-growing spirits brands in the U.S, and added achievement considering it came of age around the same time craft cocktail culture exploded. The vodka is fairly basic: It is column-distilled (standard vodka operating procedure), charcoal-filtered (which may be meaningless, more on that later), and available in an adorable rainbow of flavors. But the fairly run-of-the-mill product lineup may be exactly what Deep Eddy has going for it: It’s casual, affable, and approachable, with a very low price point of about $15 to $20 per bottle.

Like another super-chill Texan export we know, the Austin-based vodka brand seems to straddle the divide between craft/indie culture (local-ish ingredients, brand cohesion) and a more relaxed, everyday drinking vibe. Read on for seven more things you should know about the brand behind the bottle.

‘DEEP EDDY’ IS NAMED AFTER A SWIMMING POOL.

“Deep Eddy” sounds like the guy who always has a poetry quote or walks around perpetually prepared to express himself in haiku. That’s not who this vodka is named for. The “Deep Eddy” here refers and pays homage to the oldest swimming pool in Texas, built-in 1915 on the outskirts of Austin and adjacent to the banks of the Colorado River (before it was converted into a man-made pool, the “eddy” was literally just that, a swirl of cool water from the Colorado River that Texans used to cool off in). Considering that’s almost 100 years of Texans cooling off and relaxing without a ton of clothes on, it seems like a decent name for a vodka.

Deep Eddy is corn-based, like Tito’s, sourcing corn from Indiana farms. Given that the vodka distillation process strips away most everything but the ethanol, the source material for vodka is often a matter of what starch source grows most economically. Considering Deep Eddy is column-distilled 10 times, this really means near-eradication of anything but the ethanol. It’s further charcoal-filtered four times, which theoretically makes it smoother.

The reason Jack Daniels is called “Tennessee Whiskey” and not bourbon is that it’s filtered through charcoal in what’s called the Lincoln County Process. (Jack D. seems to be doing fine without the bourbon designation, but we digress.) Charcoal filtering removes impurities and can affect texture, or mouthfeel, of distillates, which is why Deep Eddy filters theirs through charcoal four times.

It might seem strange to filter the most neutral spirit, but then, if you’ve ever tasted Brita-filtered water and tried the metallic sludge water from your tap again, you’ll realize that some impurities are invisible.

Vodka can be filtered through charcoal, lava rock, sustainable micron paper, or coconut husks. The theory here is that the flavor of vodka, and maybe more realistically its final “mouthfeel” or texture, changes based on what the spirit is filtering through (and how many times). Lest you get entranced by someone selling you $80 vodka that’s been filtered through foraged wedding bouquet flower petals (it could happen), though, know this: Some distillers call this straight-up nonsense, arguing the magic happens in the distilling process, emphasizing source material and distilling style, such as pot or column.

Clayton Christopher, Gary Crowell, and Chad Auler founded Deep Eddy in 2010, which was a big year for meat dresses, yes, but also a year that vodka started making a comeback after being summarily dismissed by the first wave of the craft cocktail movement (imagine a bunch of handsome, sharp-jawed dudes in suspenders shooing you away from their basement Victrola listening party; that must be what vodka felt like). By 2010, though, the vodka market was making a credible comeback, with bartenders finding it a useful “gateway” liquor for the craft cocktail newbies. Deep Eddy got into the game just in time.

IT’S NOT A QUAINT CRAFT VODKA.

Auler, Crowell, and Christopher founded Deep Eddy and stuck with it for five years, but it’s not so much a scrappy craft spirits brand as a strategic business decision. In 2016, the firm sold the brand to Heaven Hill Distillery for $400 million, putting Deep Eddy in the company of bourbon brands like Elijah Craig and Evan Williams. Christopher had previously founded Sweet Leaf Tea Co. and sold that to Nestle and would go on to form a nice little venture capital firm with a former Coca-Cola executive. Crowell went on to work in whiskey, eventually returning to vodka in 2018 with a slightly more boutique take on the stuff, Goodnight-Loving Vodka.

Some brands — cough, cough, Tito’s — try to earn “craft” cred with claims of authenticity, like being “handmade.” (Even if it was ultimately ruled untrue in Tito’s case, it’s understandably easy to feel good about your drink being made by hand when you see its grinning founder and, well, his hands.)

Deep Eddy seems to live entirely in its chill, summery, swimming-hole vibe, with no real human faces behind the bottle, but lots of brand vitality. In fact, Deep Eddy won “Best Mobile Marketing” (a category that extends beyond the Oscar Mayer wiener truck, it turns out) for the three 1946- and 1947-era vintage Spartan trailers that traveled cross-country to preach the McConaughey-chill-level gospel of Deep Eddy.