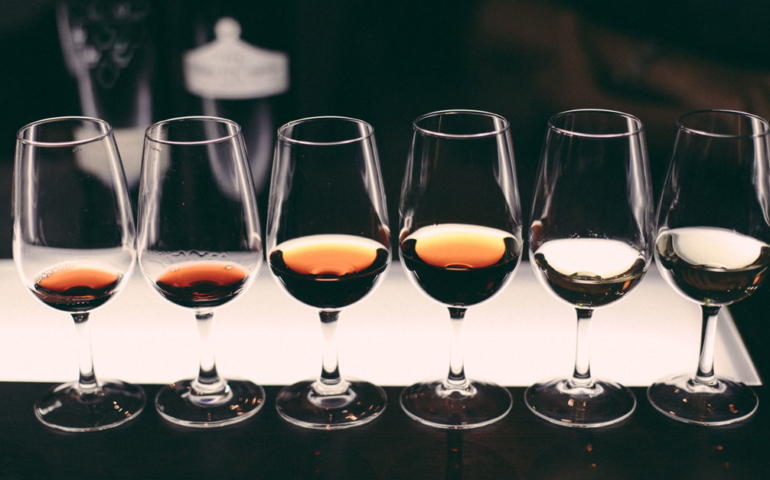 If it seems like every other person you follow on Instagram is taking a vacation in Portugal, you’re not imagining things. Tourism to Portugal is skyrocketing, Reuters reports, and the number of foreign visitors climbed 12 percent to 12.7 million in 2017.

“Oh, and you must go wine tasting in the Douro while you’re there,” trills a chorus of globetrotters, all blessed with seemingly endless time and travel budgets.

Whether or not a trip to Portugal is your future, you’ve probably heard of port, the country’s signature fortified wine.

“About half the vineyard land in Portugal’s Douro Valley is devoted to grapes for port, which comes in a half-dozen styles, from white port to basic ruby to premium ports such as tawny, which is aged for decades in barrels and has surged in popularity in the U.S. over the past 10 years,” writes Elin McCoy in a May 2018 Bloomberg article titled, “Why You Should Be Excited About Port Wine.”

The construction of that headline speaks volumes. The truth is, we need convincing. Despite soaring travel rates, port remains pretty misunderstood in the United States. “Some think that it is only for after dinner,” says Adrian Bridge, the CEO of The Fladgate Partnership. Others are under the impression it is only good for winter, or something only older folks drink. None of these things is universally true, Bridge says.

“The misconception is they’re all the same, and there’s only one style,” says Regine Rousseau, CEO, Shall We Wine. Yes, many ports are sweet, but even those are “more than sweet,” Rousseau says, balancing fruity flavors with acid and nuancing them with age.

Here is everything you need to understand port — no airfare required.

What Is Port, Exactly?

Port is a type of fortified wine, which, in all honesty, might be its first barrier to entry. Like “cask-strength,” or “gluten,” “fortified wine” is a term many of us casually use in conversation but privately struggle to define.

Fortunately, the process is fairly straightforward: Portuguese winemakers add a grape-based spirit to their wine mid-fermentation, creating something sweeter and boozier than typical wine. Next, they age their port-in-progress in barrels (and, in some cases, in the bottle) to varying degrees to obtain the desired color, sweetness, and flavor profiles.

Originally, this was a product of necessity. As legend has it, when Great Britain warred with France in the 17th and 18th centuries, it reallocated its wine-buying budget to Portugal. Portuguese winemakers fortified their juice to help it survive the sea voyage to the U.K.

Of course, today, we don’t need to physically set sail to a wine-growing region to taste its wares. Port is sold worldwide.

Ruby port is fruity and, as its name suggests, generally a bright garnet color. Most bottles clock in with upwards of 100 grams of residual sugar and are barrel-aged for less than three years. The same is true of tawny ports, which are essentially ruby ports aged in small wooden barrels, giving them toffee and caramel colors.

If you age ruby ports in barrels for five years, they become reserve ruby ports. Their rich, fruity flavors are nuanced and alcohol softened by the time spent in wood. These are excellent after-dinner drinks for those times when you want to drink your dessert, Rousseau says.

Late-bottled vintage ports (LBV) are reserve ruby ports made with wines from a single harvest. LBVs are sweet and boozy, with light tannins and dark fruits like cherry, plum, and blackberry alongside pepper and cloves.

Reserve tawny ports age in barrels for at least six years, giving them nuanced, nutty flavors, and darker toffee colors. Tawny ports with indication of age mellow in barrels for 10, 20, 30, or 40 years before they’re bottled.

The oldest category is vintage port, which is only made from quality vineyards during good harvests. Vintage ports are bottled after a short time in large oak barrels, and their rich, fruity flavors are offset by structured tannins and vegetal notes. Bottle-age these for best results, and don’t forget to decant: Because vintage ports are unfiltered, they might be cloudy when you (finally) crack into them.

How to Drink Port

Most Americans think of port as a substitute for dessert or accompaniment to cheese, and white varieties are perfect for cocktail hour. Still, port doesn’t need to bookend your meal.

Port cocktails can introduce the range of fortified wines to new palates. Esteemed bartender Naren Young reportedly uses ruby port as a float in a New York Sour, an early 20th-century drink made with bourbon, lemon juice, sugar, and bitters. You can also try riffing on Daiquiris and Manhattans by substituting rosé and white or tawny ports, respectively, for rum and whiskey.

Sommeliers often pair spicy foods with wines with some residual sweetness. Why, then, not incorporate port into menus?

“It would be interesting to see more people do savory pairings with port,” Rousseau says, noting that the sweet-savory contrast is hardly foreign to American palates. “I mean, who doesn’t love a peanut butter and jelly sandwich?” All we are saying is give port a chance.

The article All of the Styles of Port Wine, Explained appeared first on VinePair.