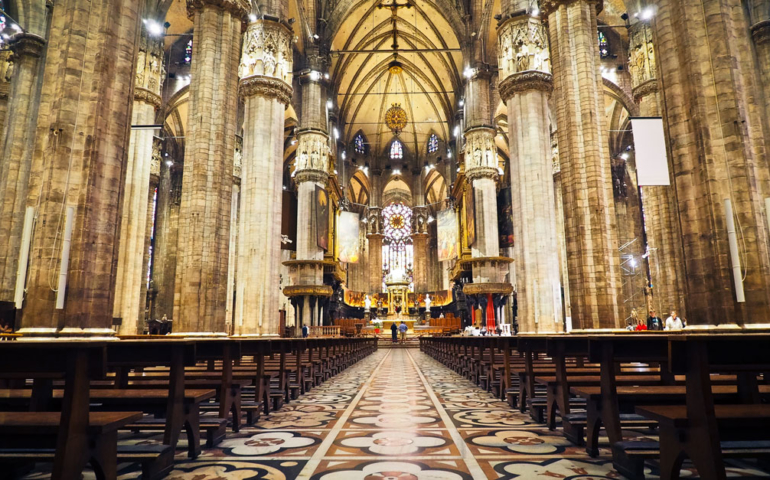 “There’s nothing in the Bible that says you can’t drink alcohol in a responsible manner,” Chris VanHall, Greater Purpose Community Church pastor, as well as its future brewer, said in August 2018. The Santa Cruz, Calif., house of worship plans to open a brewery in summer 2019.

Historically, churches were often among a city or town’s soundest structures. Now, out-of-service houses of worship are proving to be ideal spaces for new brewing businesses. At least 10 former churches were converted to breweries between 2011 and 2017, with several more in planning, AP reported.

Located in the appropriately named town of Porter, about 30 miles north of Houston, Back Pew embraces its dark side, seeking “inspiration from sources strange and fantastic … with creative characters and daring twists,” the company statement says. The self-described “misfits” brew light-bodied beers (“Saints”) along with those that are “dark, bold, and brazen” (“Sinners”). These include Black Habit Schwarzbier, Sweet Salvation Brown Ale, and 9th Circle Black IPA.

Opened in the former Water’s Edge United Methodist Church in 2017, Beer Church embraces its environs. Taps are built into a wood altar where patrons and former parishioners recall being baptized. Rev. Brad Bartelmay, the church’s former pastor, “is one of our biggest supporters,” Beer Church co-founder Jane Simon told the Chicago Tribune in 2017. In addition to beers like Pontius Pilate IPA and Crooked Cross Cream Ale, Beer Church offers Neapolitan-style pizzas and other pub fare. In 2018, it unveiled the Beer Church Garden, which you can preview in this neat drone video.

In 2013, Breaker Brewing opened its doors in the former St. Joseph’s Monastery & School. The brewery has since had several upgrades, including obtaining its brewpub license in 2014, adding a dining area and bar in 2016, and building a new 15-barrel brewing system in 2017. There’s also an outdoor dog-friendly patio.

At Brewery Vivant in Grand Rapids, Mich., brewpub visitors can order a pint at what was once the altar of this former funeral chapel. Opened in 2010, the brewpub is inspired by the small breweries of southern Belgium and northern France, celebrating the “bon vivant” with European-style “Michigan farmhouse ales” and a scratch kitchen serving rich countryside dishes like duck confit and chef-selected charcuterie. Brewery Vivant is also the world’s first LEED-certified microbrewery.

Castle Church Brewing takes the cake in churches-turned-breweries because it actually operates as both. The Evangelical Lutheran Church in America welcomes all with a 20-barrel brewhouse with food and games Monday through Sunday, and offers Sunday worship.

Ask a beer lover about Pittsburgh, and chances are they’ve been to the Church Brew Works, where pillars surround a brewhouse altar, and diners and drinkers praise rich dishes like spinach, feta, and smoked Gouda dip; Kobe beef and mushroom cheesesteaks; and bison bolognese. Brews include Great American Beer Festival award winners like Celestial Gold and Pious Monk Dunkel.

Owner John Trippy is not a priest, he’s a former oral surgeon, but he did restore this former Methodist church in Bryan, Ohio in 2013. It is now a brewery, restaurant, and event venue, and its outdoor beer garden is described by CraftBeer.com writer Heather Galanty as “peaceful.” Trippy gets points for being totally goth, too: In the “crypt room,” diners can peer down at a coffin encased under glass in the floor below, a relic uncovered during renovations.

With dozens of hotel, pub, and restaurant locations throughout Oregon and Washington, McMenamins runs a variety of cool businesses in restored spaces. Its Old Church & Pub brewery in Wilsonville occupies a renovated 1911 church. Wood floors, high ceilings, stained glass, and “unusual artwork” grace the inside space, while an outdoor amphitheater provides live music and events.

Many Saline residents and visitors are drawn by the region’s salt springs, but the chemistry-loving Salt Springs Brewery, built in a nearly 190-year-old former church, offers a different kind of liquid. Beer, cider, and wine are all on the menu, alongside a food menu featuring local ingredients. Traditional “true-to-style” ales and lagers (Kölsch, hefeweizen) are made with locally malted grains and Michigan hops.

Built in 1879, St. Joseph Church has undergone several iterations. It functioned as a house of worship until 1949 when, due to competition from other congregations, it held its last mass. Then, it served as a Catholic community center and meeting hall until 1954. It became a brewery in 2015. Today the brewery and restaurant offer beers with names like Confessional IPA, Dark Angel Black Lager, and Testament Tripel. It also serves wine by the glass and bottle, and classic cocktails from a full bar.

Although named, and themed, after the burly, bathtub-loving 27th U.S. President, Taft’s Ale House is housed in what was once the oldest Protestant parish in Cincinnati, St. Paul’s Evangelical Church. Built in 1850, the stunning 49,000-square-foot space was also once home to the Cincinnati Car Company Factory. BeerAdvocate named Taft’s one of the best new breweries in 2015.

Another Cincinnati church-turned-brewery established in 2015, Urban Artifact occupies the lower level of the historic St. Patrick’s church in Cincinnati’s Northside. The brewery, bar, and music venue has capacity for several hundred drinkers, including a courtyard where patrons can sip tart fruit beers outside. The Gadget, a “Midwest fruit tart ale” made with blackberries, raspberries, and vanilla beans, and Keypunch, a gose with Key lime zest and juice, are among the current favorites.