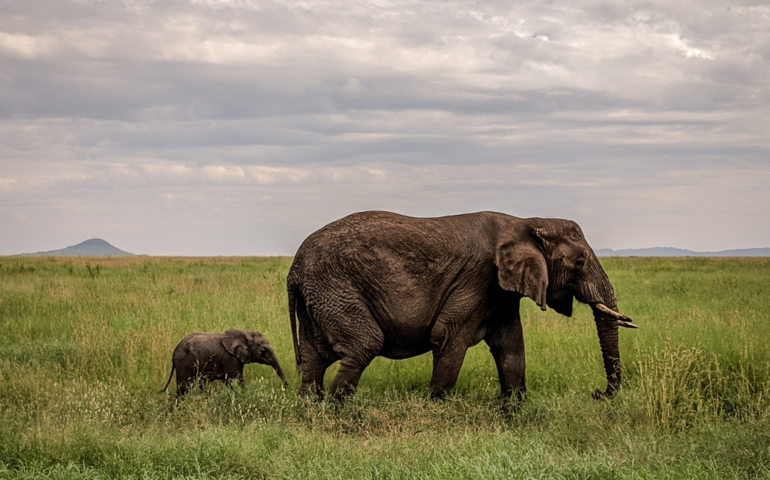 Going on an African Safari is a dream come true — but should you CAMP or GLAMP?

If you’re planning a trip in the near future, make sure you register for travel insurance before you go.

You can also check out my list of essential items for backpackers!

For many of us, going on an African Safari is a once-in-a-lifetime adventure.

I certainly thought so before my first visit to East Africa!

This was back when I was married and expecting a pile of rugrats to be delivered by stork to my doorstep at any moment. That trip, my first African Safari, was meant to be my “last big trip” before full-blown adulthood.

Yes, that was back when I thought I could predict the future!

Little did I know all of the big changes that were coming into my life.

I knew when I was leaving Kenya on that first trip that I wanted to come back to East Africa. I fell in love with the region, as so many people do, so I was thrilled to go back this year to visit Tanzania.

The first time around, my younger sister and I went to Kenya to see the Mara.

This time, my partner and I went to Tanzania to camp in the Serengeti. He and I met in Romania before deciding to live together in France, and it would be his first time to sub-Saharan Africa.

After spending most of last year backpacking, camping, and staying in hostels, I knew I didn’t have to shell out a fortune to have a nice time on safari. African Safaris aren’t cheap no matter how you look at it, but there are plenty of ways to cut costs.

My first Safari was definitely a “glamping” experience. My second was what they call “budget camping.”

When you’re planning your own dream safari, it isn’t easy to know the differences between these two travel styles.

Now that I’ve done both, I’ve decided to share my experiences to help you plan your own dream safari!

How to Choose Between Camping and Glamping for Your African Safari

I’ll go through each component for both Glamping and Camping, so you can get an idea of the major differences.

We stayed at the Porini Amboseli Game Camp, the Mara Intrepids Camp, and Nairobi Tented Camp.

At each camp we had a semi-permanent private tent with real beds, a private bathroom, a desk, reading lamps, and even beautiful carpets on the floor.

Each night we would find a towel-wrapped hot water bottle tucked into our blankets to pre-warm the bed. When we wanted to take a shower, someone would come fill our tank with hot water.

The tent was the size of a small hotel room, with plenty of room to stand-up and walk around. A mosquito net was provided for each bed to help protect against nighttime pests.

After dinner, the staff would ask us if we would prefer tea, coffee, or hot cocoa the next morning. When it was time to wake-up, we would hear a soft voice outside the tent calling our names. Once we called “come in!”, a member of the staff would unzip the tent door and bring a tray containing a hot thermos of our beverage of choice, as well as a few biscuits to nibble on. We would dress, sit down to a full breakfast, and then head out for a game drive.

Lunch was sometimes served picnic style if we were gone for a long game drive. Other times we would come back to camp and have a sit-down meal.

Dinner was always several courses, and often times we would be offered a gin and tonic as a sun-downer before dinner. There were other travelers staying at the camps, so we usually shared both table and conversation at meals.

As the tent camps were semi-permanent, the tents were typically erected beneath large trees to keep them shaded. This helped keep them from accumulating heat during the day.

We camped at the Jambo Lodge and Campsite in Mto Wa Mbu, the public “Simba A” campsite on the rim of the Ngorongoro Crater, the World View Campsite at Lake Natron, and at another public campsite in the Serengeti near Seronera.

When we would arrive at a campsite, our guide and cook would get to setting up the camp. They would pitch the tents, and we would help bring the sleeping pads, pillows, and sleeping bags (provided by the tour company) from the vehicle.

Our tent was just big enough for two people and two bags. Like a typical camping tent, you could not stand-up inside. The tent was well-made, but not completely impervious to some of the rainstorms we experienced while we were there at the end of the wet season.

Public campsites rarely have trees for shade, so the tents can really heat up during the day. I was often too hot at night and had trouble sleeping. I could have also done with an extra sleeping pad, as my hips were quite achy each morning.

Our meals were prepared by our cook and served at a previously-agreed upon time, depending on when we would need to leave for game drives.

The food was quite good, especially considering the facilities and tools he had to work with! Since we had booked a private tour, our meals were at a private table.

No gin and tonics were offered on this tour (ice?), but we planned ahead by buying a box of red wine in town.

We experienced quite the variety of bathrooms at campsites during our African safari. Some had hot water, others did not.

Often times there were large creepy-crawlies hanging out with you in the shower. At Lake Natron there were lots of big frogs enjoying the humidity in the showers (and working very hard to make baby frogs — quite distracting when you’re trying to work up a shampoo lather).

Many of the bathrooms had both squat-style and sit-style toilets. In a few places the wooden doors had warped from the weather and would no longer shut or lock.

Our tour operator recommended to us that we fly from Amboseli to the Mara. They told us that the roads in that region of East Africa were notoriously unreliable and slow-going, and since we only have 5 days we wanted to make the most of our time.

We went along with their recommendations, and took 3 flights on tiny six-seater airplanes in the clouds above the bush. This was a very thrilling (read: terrifying) part of the trip!

Flashback to that one time in Africa… #slightlyterrifying

For our budget camping African Safari, we drove everywhere. The longest drive we had was around 9 hours and took us about 100 kilometers. Yes, you read that correctly! This was a drive between Mto Wa Mbu and Lake Natron. If you try to get directions on google, it will tell you that no route exists.

Our driver-guide laughed in the face of google and took us on an epic day-long journey through an amazingly wild part of Tanzania. At the end of the trip we both agreed that this was one of our favorite parts. The scenery was breathtaking and the drive itself was an adventure.

We forded rivers, slid through mud pits, and crawled over huge piles of rocks. In many places I was sure we had lost the road, but our driver always knew where he was going.

Driving certainly isn’t as fast as flying, but it’s the best way to enjoy the remarkable scenery.

Our tour was organized by one company, but along the way we stayed at several semi-permanent tented camps. Each camp had their own drivers, guides, and spotters.

The vehicle was shared with other travelers staying at the same camp. The game drive times were set by the camp and were non-negotiable.

When sharing a vehicle with other people, there are times when your desires don’t match those of everyone in the car. Maybe you want to continue watching an animal but others want to move on, or vice versa.

We saw plenty of amazing wildlife on this tour, but sometimes it was hard to jockey for a good position to take a photo. We saw the “Big 5” on this trip, along with everything else we had hoped to see.

On this tour we had one driver-guide (a driver, guide, and spotter all-in-one) as well as a private cook who came with us all week. Usually our cook would stay behind at the camp to prepare meals, as well as pack/un-pack our supplies.

For the entirety of the tour, we had the same vehicle all to ourselves each day. This meant we could stretch out, charge our cameras, leave things in the car, and decide what time we wanted to go on game drives.

It also meant that we could decide when we were ready to move on, whether we wanted to continue exploring the grasslands or go find hippos in a nearby pond, and we never had to fight for a good view.

Our driver-guide worked some absolute miracles in our 4×4 vehicle, taking us to places we thought no car could go. We were very lucky and saw the “Big 5” again!

There are not only two options when it comes to going on an African safari. While many tour operators and websites offer a choice between “budget camping” and “luxury camping,” you can absolutely throw it out the window and make your own plans.

A great option for those who want something a bit in-between camping and glamping would be to arrange a private tour and stay in less-glamorous camps or lodges along the way.

We loved having a private tour because it meant we had more freedom, flexibility, and privacy on our trip. For those who can’t stomach the idea of sleeping with lions and showering with frogs, there are plenty of budget/mid-range hotels and tented camps along the way.

In Tanzania, people seem to really love Africa Safari Glamping in Mto Wa Mbu (surprisingly affordable!), and there are plenty of options in Kenya, too.

I’ll echo what I said in this post about doing a self-drive camping safari: when you add up the total costs of renting the car, paying for gas, renting camping equipment, and paying the park entry fees, it’s often more affordable to book with a tour company.

Plus, you get the added bonus of having someone else do the driving (which can get quite dicey, let me tell you!) while YOU look at the animals.

I’m sure I’ve given you lots to think about, now get out there and plan your own African Safari!

Pin Me For Later!