In this article, we’ll be looking at a question go around amidst pregnant woman. You must be wondering what can the question be?  because pregnant women can ask lots sometimes and it drives the man insane and almost losing his mind, from I want beef to, I want dry fish, to I need my feet in cold water, etc. But we are looking at is none of the aforemention, but it’s good or bad to drink red wine during pregnancy.

To answer we need the help of an expert, and his what he had to say; effects and benefits. 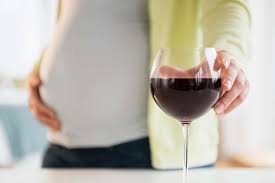 Wondering whether you should enjoy that old tipple of red wine while you are pregnant? Is it a glass of wine that helps you unwind after a long day at work? If you search the internet you will find a divided opinion on this. Some say that drinking up to seven glasses of red wine a week won’t cause any harm to the baby while others opine that no matter how little you drink, you stand the chance of causing harm to your baby’s pancreas. This can happen if you drink red wine when you are expecting. We will say, why take risks? Read on before you decide whether you want to gulp down that tempting glass of red wine or not.

Red wine is believed to be beneficial because the antioxidants present in red wine help preventing heart diseases by increasing levels of high-density lipoprotein (HDL) cholesterol (the “good” cholesterol). Moderate amounts of red wine is also said to protect against artery damage and obesity. Red wine in moderation may be safe for a woman, but it could lead to developmental abnormalities in a baby if a woman is pregnant. However, when you are pregnant, it is best to avoid any and all alcoholic drinks.

Is Red Wine Safe During Pregnancy?

A recent British study claims that it is safe for pregnant women to drink up to a glass of wine every day, without putting their child’s life in jeopardy. Findings also concluded that in a static balance, it was observed that children performed better if their mothers had a higher total consumption of alcohol before and after pregnancy. This is likely to confuse pregnant women, even more, owing to so many varied opinions on the subject. When it comes to red wine, the whole debate revolves around an ingredient found in red wine called “Resveratrol”. It is said to protect one against obesity. So when you are not pregnant this ingredient can be considered very healthy, but when you are pregnant, it is said to have some adverse effects on the baby’s digestive system.

Again, Resveratrol is a very common ingredient and is present in even in some fruits and chocolates. Not only that, but it is also present in many medicines too. So, does that mean you should avoid taking fruits and chocolates too? No, the point is to take everything in the appropriate proportion. However, there is no research about the potential effects of drinking alcohol when expecting and what amounts are safe. Too much of anything can be harmful.

Dr. Grove did a study and found that pancreatic abnormalities were there in cases where Resveratrol supplements were given to lean monkeys who were pregnant and consumed a low fat healthy western diet. You can read about it here.

On the other hand, a relatively new study in Britain showed that drinking one glass of wine a day did not cause any harm to the fetus and the kids were absolutely fine.

Although, heavy consumption of alcohol, leads to significant developmental issues in children.

Physical and Emotional Effects of Having Wine When Expecting

The difference between drinking wine during pregnancy and when not pregnancy is that when you are expecting, the wine reaches your baby too through the placenta and umbilical cord. You are an adult and your liver will work harder to break down the alcohol in your blood but your baby’s tiny liver can’t take the load because it is still in the developmental stage. It will only result in affecting your baby’s physical as well as mental health.

Red Wine easily reaches the fetus by seeping through the placenta. As your baby’s liver cannot process the alcohol, the concentration of blood-alcohol increases in the developing baby. The alcohol may also interfere with the process of delivering oxygen to the fetus’s tissues and organs.

Even before you might know you are pregnant, your baby’s heart, brain, and tissue muscles start developing. So, for those who say it is safe to drink until 3 months of pregnancy are wrong. Consuming alcohol is risky at any given point of your pregnancy.

The condition where the fetus shows signs of defects due to excessive alcohol during pregnancy is called Fetal Alcohol Syndrome (FAS). The babies born may show defects like facial abnormalities, their growth may be slower, have severe problems with the central nervous system, and even show signs of mental retardation. Babies may also be born with less weight and smaller skulls.

It is difficult to determine the exact amount of wine which can cause harm to the fetus as every pregnancy is different. The way each mother and each baby inside the womb has tolerance to alcohol is different, but it is always better to avoid it.

Drinking any kind of alcohol during pregnancy is obviously harmful, but how much risk is it to drink moderately or lightly has not been established clearly yet. As said before, the whole medical fraternity stands divided on this topic. A glass of wine may appeal to you now that you feel your pregnancy is settled, however, we would say that it is your personal choice but do consult your doctor first.

The third trimester is a crucial one, and you may feel like gobbling a glass of red wine to ease yourself a bit. However, before you decide to hold up that glass, speak to your doctor. There might be complications in your case and your doctor might totally prohibit it. It is just a tiny sacrifice to bring the miraculous bundle of joy into your life.

Ultimately, it is for you to decide. It is also advised that you consult your doctor for the same. Again, as said before, your pregnancy is totally different from that of your friends. So, if she has taken a few drinks don’t just assume you can take it too. So, before sipping on that glass of wine ensure that you know whether or not it is best for you and the baby. Human body and pregnancy is something that can never be ascertained fully, taking risks may just not be worth it!